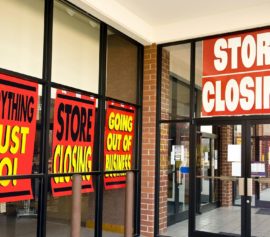 What do Radio Shack, Toys “R” Us, and Circuit City all have in common? They all failed to keep pace in a high-tech consumer marketplace and recently went out of business. In 2019, several other major retailers are on the edge of extinction. But all is not lost for these big companies.

Many companies can restructure and survive bankruptcy. Often, they come out the other side much better off and stronger than ever. For example, companies like Ally Financial, Chrysler Motor Company, and Texaco all went bankrupt at one point only to re-emerge as thriving businesses.

At Michael H. Schwartz, P.C., we help New York businesses to file for bankruptcy under Chapter 11 of the U.S. Bankruptcy Code. If your business is struggling to make profits, or if it has suffered from a poor investment or poor timing in the market, Chapter 11 could be the right choice. Call us first! Michael can review your case in a confidential consultation and help you to understand and explore all of your legal options.

Here, we look at eight retailers that could go bankrupt in 2019:

In 2018, the massive retailer cut more than 1,000 jobs. It currently carries around $4 billion in debt. Moody’s downgraded the Penney’s card. The company also currently holds a FRISK rating of 1. That rating indicates that the company’s probability of bankruptcy within the next 12 months lies between 9.99% and 50%.

The office supplies giant took a major hit in recent years. With the rise of online retailers like Amazon, people simply are not going to big office supply stores anymore. They have struggled to remain competitive. Even Office Depot’s copy and print services are largely being supplanted by online services like Vistaprint. Currently, Office Depot has a FRISK rating of 2. Sales went down 7.1% in 2017, and the company holds more than $1 billion in debt.

Pier 1 is a boutique home furnishings shop that caters to customers with a unique style and flair. However, when the Trump Administration announced tariffs on Chinese imports, the company took a hit. It released a statement explaining that it sources as much as 60% of its products through foreign imports, including imports from China. The company has announced plans to reduce the impact of the tariffs on its bottom line. Still, with rapidly declining sales and more people shopping online today, stores like Pier 1 could be entering their extinction phase.

The wedding dress retailer has long been the industry leader, with more than 300 shops in the U.S. and Canada. Still, in 2018, the company filed for Chapter 11 bankruptcy. Facing mounting debt and the reality that more and more people are finding different ways to purchase wedding dresses today, it’s questionable whether the restructuring will be enough to save the company.

This long-standing institution in the fashion retail industry is facing real problems. In 2018, the company was more than $4 billion in debt. It also held a FRISK rating of 1.

Sales continue to plummet for J. Crew. The company also remains about $2 billion in debt. As online sales increase and mall shopping drop nationally, stores like J. Crew could soon become things of the past unless they find ways to reinvent themselves.

With a FRISK score of 2, this once influential pharmacy chain is now struggling for market shares against competitors like CVS and Walgreens. Recently, Rite Aid even attempted to complete a merger with Walgreens. It has since closed 600 stores around the country.

This company is another major pharmacy chain, with stores from Mississippi to Illinois. Much like its contemporary, Rite Aid, Fred’s Pharmacy could soon file for bankruptcy as its sales just aren’t keeping pace.

How Are Retailer Bankruptcies Different?

A Chapter 11 bankruptcy restructures debt. A retailer that files for bankruptcy under Chapter 11 of the U.S. Bankruptcy Code can buy needed time to repay lenders and liquidate assets. Retailers, in particular, often hold large quantities of surplus inventory. They can use that inventory to repay debts or resolve negative equity problems. By restructuring debt, offloading inventory and becoming more flexible, a retailer can re-focus investment and, eventually, start earning profits again.

Can a Company Survive Chapter 11?

Absolutely! Look at Texaco, Chrysler and many other major companies in existence today. For those companies, a Chapter 11 bankruptcy was not a “death nail.” Bankruptcy can fit into a larger strategy to rebuild a company and give it a new purpose or mission. A Chapter 11 bankruptcy may not be good news for investors. Still, it can be a great option for a business looking to rebrand or reinvent itself for the next generation.

Can You File for Chapter 11 Bankruptcy Twice?

Yes, you can file for Chapter 11 bankruptcy as many times as you qualify for it. Also, you do not have to wait a certain period of time between filings. However, you need to be aware of one exception.

If you completely liquidate your business’s assets, and you will be terminating all business after the discharge, then your bankruptcy will be treated very much the same as an individual Chapter 7 bankruptcy plan. You would need to wait a while before filing for the same protection again.

On the other hand, if you plan to continue operating the business and paying debts, but you simply need more time, or if you need to restructure debts to pay them over time, you will face no limit on re-filing for protections in the future.

Contact Us Today for Legal Help with Chapter 11 Bankruptcy

For more than 40 years, White Plains bankruptcy attorney Michael H. Schwartz has helped individuals and their businesses in New York to get a fresh start during times of economic distress. At Michael H. Schwartz, P.C., we are second to no one. Contact us now. You will be glad you did.