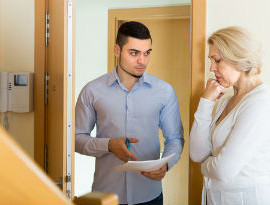 Older individuals face more harassment and abuse from debt collectors, on average, than younger individuals do, according to a recent report released by the Consumer Financial Protection Bureau (CFPB). The researchers found that older Americans are more likely to be subjected to legally prohibited forms of harassment as well.

The report examines complaints filed with the CFPB between July 2013 and September 2014 by Americans who are 62 years of age or older. The report found that 48 percent of the complaints involved a situation in which a debt collector repeatedly pressed the person to pay a debt that the person did not owe. Harassment over medical debt, the debts of deceased family members and failure to make sure the person being harassed was in fact the same person who owed the debt were the most common examples.

In 24 percent of cases, abusive or harassing communication tactics were used. Other illegal tactics debt collectors tried on older individuals included making false statements or representations (8 percent), refusing to disclose or inaccurately disclosing the nature and amount of the debt (8 percent) and improperly sharing information about the individuals involved (5 percent).

Illegal threats to garnish a Social Security retirement benefits, Medicare, veterans’ benefits or other federal government benefits topped the list of improper tactics, according to the CFPB report.

Because the numbers cover only complaints that were made to the CFPB, they do not represent the scope of the problem as a whole. Many older individuals face harassment from debt collectors, but do not report their concerns to the CFPB. Nevertheless, both older and younger consumers alike “have consistently submitted more complaints each month about debt collection than about any other financial product or service,” according to the report.

The CFPB recommends that older Americans, and the younger family members and professionals who care for them, learn as much as they can about their rights when facing debt collection. For instance, the CFPB notes, most federal benefits cannot be garnished by debt collectors, and debt collectors are not allowed to falsely claim that they can or will garnish such benefits.

Regardless of your age, if you’re facing harassment from debt collectors and trouble making regular payments, there is hope. Options like bankruptcy or mortgage modification can help you get your head above water. Working with a Orange County Bankruptcy Lawyer can enable you to stop debt collection calls while you determine whether bankruptcy or another option is right for you.

At the White Plains bankruptcy law firm of Michael H. Schwartz, P.C., we know how debt can turn someone’s life upside-down. That’s why we’re committed to helping each of our clients find the right options for getting back on track.

Mr. Schwartz has assisted clients with more than 4,000 filings. As one of the top-rated bankruptcy lawyers in New York, Mr. Schwartz can help you stop abusive and harassing debt collection calls and preserve your future financial well-being. To learn more through a free case review, call (800) 666-9743 or send us a message.