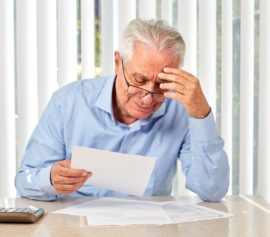 Bankruptcy rates have tripled among older Americans since the early 1990s, according to a recent article in the New York Times. The number of people age 65 and over who are filing for bankruptcy has tripled since 1991. From February 2013 to November 2016, there were 3.6 bankruptcies per 1,000 people between the ages of 65 and 74. The number of older Americans filing for bankruptcy has tripled since 1991.

Part of the reason for this trend is a shift from employers and government to individuals bearing the majority of the financial risk due to the shrinking social safety net. Since some older people are living longer, they may not be prepared to finance 30 years or more of retirement.

Many older Americans can manage until an unexpected circumstance hits, and they find themselves in financial trouble. For 1 in 3 people who receive Social Security, 90% of their income comes from their benefits. Some seniors are forced to take part-time jobs to pay bills or make ends meet. Some seniors on fixed incomes have used credit cards to cover expensive medical treatments, gas, food, or other necessities to stay afloat. An increasing number of seniors are working past the traditional retirement age out of necessity.

Number of Older Americans Filing for Bankruptcy Has Tripled Since 1991

There are many factors that have contributed to the increasing number of seniors filing bankruptcy, such as waiting a longer time to collect Social Security benefits, declining incomes, lack of a pension or 401(k) funds, and a lack of adequate savings. Mortgage and student loan payments also play a role. Some seniors have hefty mortgage payments, credit card debt, or have co-signed for student loans that they are responsible for helping to pay off.  Unfortunately, most student loan debt is not eligible to be dismissed in bankruptcy.

Not only are older people carrying debt into retirement more than previous generations, but health concerns play an important role. The main reason for most bankruptcy filings is dealing with overwhelming medical expenses. For many older Americans, one catastrophic health problem could mean financial disaster.

Most seniors depend on Medicare to pay some of their health care expenses. But due to high premiums and gaps in health insurance coverage, most people are forced to pay out of pocket for some medical bills. The average Medicare beneficiary uses 41% of their Social Security check to cover health care costs not covered by insurance.

It’s not just Baby Boomers experiencing financial difficulties, but also the next generation – Generation X – that is filing for bankruptcy protection more and more in recent years.

Why Filing for Bankruptcy Might Be a Fit for You

You may have reached the point where you know you need to file for bankruptcy but are hesitant to do so. You may feel like you are letting yourself or your family down. You might feel ashamed about your financial situation. You think you may lose valuable assets and property if you file.

The truth is that it is usually not your fault when you have debts you cannot pay. Many different situations can lead to difficulties with money. If you are working, you might experience a job loss. You could become seriously ill and rack up huge medical bills. You could be going through a divorce and lose half your income.

Bankruptcy is a legal tool that is designed to help people like you who are struggling to eliminate crushing debt. There many factors that happen that are beyond your control, which is why you need to seek the advice of an experienced bankruptcy attorney to help you figure things out.

How Bankruptcy Laws Protect You

Bankruptcy can help stop creditors and protect your income from wage garnishment.  If you are retired, your retirement income is also protected from bankruptcy. Rather than using your valuable retirement assets or income to pay off massive debts, most retirement accounts are safe. This means you do not need to draw from your 401(k), 403(b), profit sharing, pensions, or IRAs to pay off existing debts that are included in either a Chapter 7 or Chapter 13.

Concerning property, the equity built up in a home or vehicle might be your only asset.  However, if you are facing home foreclosure or repossession of a car, a Chapter 7 bankruptcy will stop the process temporarily and allow you to keep your property. If you aren’t current on payments, have more equity than you can keep, or you want to retain ownership, Chapter 13 might be a better option because it allows you to catch up on past due payments to keep your assets.

Bankruptcy laws are in place to give you a fresh start. Bankruptcy is an opportunity for a new financial beginning for you. For over 40 years, the New York bankruptcy lawyer at Michael H Schwartz P.C. has been continuously revising and streamlining the bankruptcy process to make it as fast and painless as possible.

We have helped thousands of individuals and businesses in wiping out debt while being able to retain their assets so that they can move forward with their life. Our law firm provides quality legal representation for clients in Westchester, Rockland, and Putnam County, as well as the Hudson Valley and New York City area. Contact us by phone or online for a free and confidential consultation today.