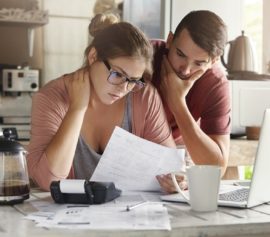 Total personal household debt in the U.S. rose to a record-high $13.54 trillion in the last quarter of 2018, according to a report by the Federal Reserve Bank of New York. It marked the eighth straight quarter in which consumer debt hit an all-time high in our country and the 18th consecutive quarter in which the debt level increased from the previous one, American Banker notes.

Total household personal debt in the U.S. is now $869 billion higher than it was at the outset of “The Great Recession” in the summer of 2008  The debt level is also roughly 21 percent higher than when it hit a post-financial crisis low in the second quarter of 2013.

Here, we examine a few of the factors which are causing consumer debt levels in New York and throughout the country to increase.  If you believe that you have taken on too much credit and need debt relief, don’t wait to act. Contact experienced New York bankruptcy attorney Michael H. Schwartz today. He can provide a free and confidential consultation and help you to understand all of your legal options.

What Is Driving Household Debt in America?

The Federal Reserve Bank of New York issues a quarterly report on household debt in the U.S. based on its Consumer Credit Panel, which it describes as a “nationally representative sample drawn from anonymized Equifax credit data.”  The goal of the report is to give a snapshot of household trends in borrowing and indebtedness, including identifying the factors which are driving debt in the U.S.

Mortgage debt is widely blamed as the cause of the financial crisis that rocked the U.S. in the late 2000s. According to the New York Fed’s latest report, housing debt in the country remains high. However, different factors appear to be fueling the current rise in total household debt: Student loans, auto loans, and credit card debt. Let’s take a closer look at how we can assist you.

More Americans are borrowing more money than ever before to buy and lease vehicles, according to the New York Fed.

In 2018 alone, auto loan originations in the U.S. reached $584 billion, the highest level in the 19 years in which the New York Fed has tracked such data. As with student loans, statistics indicate that Americans are struggling to make their auto loan payments. More than seven million Americans were delinquent (more than 90 days behind) on their auto loan payments in the last quarter of 2018.

“That is more than a million more troubled borrowers than there had been at the end of 2010 when the overall delinquency rates were at their worst since auto loans are now more prevalent,” the New York Fed states. “The substantial and growing number of distressed borrowers suggests that not all Americans have benefitted from the strong labor market and warrants continued monitoring and analysis of this sector.”